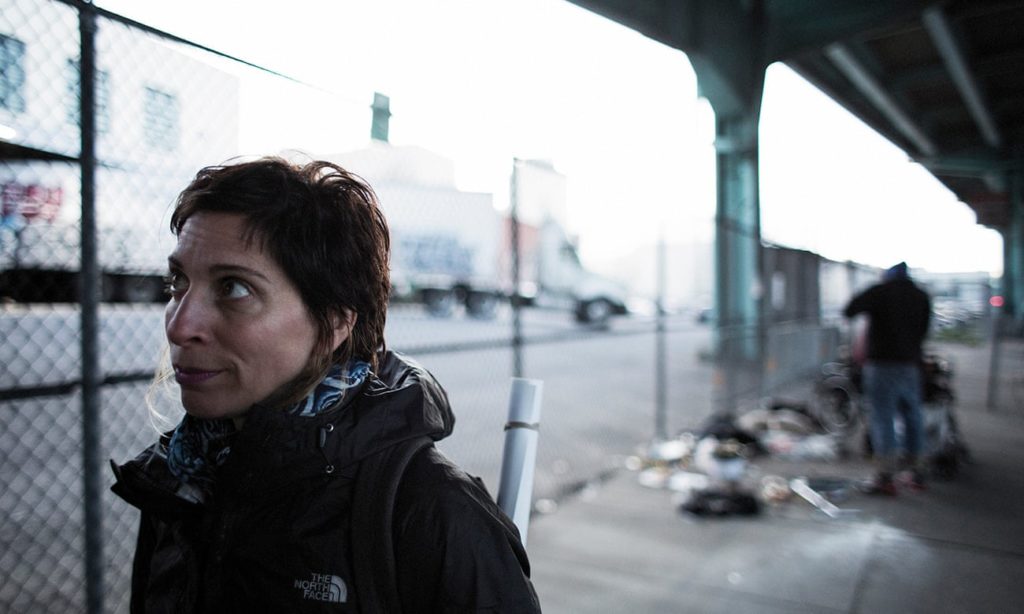 Leilani Farha was being given a walking tour in central San Francisco. Near a thronged artisanal grocery store and a food-truck park, she saw something under a freeway that gave her pause.

A young homeless man sat on the ground. He wore two pairs of jeans and had a hood pulled over his long brown hair. Before him was a crockpot filled with burning paper, over which he was heating tortillas in a dirty skillet. As cars, cyclists and tech commuter buses rushed past, white smoke poured into the darkening air.

“The last time I saw cooking on a sidewalk,” Farha said, “was in Mumbai.”

Farha, 49, is a Canadian lawyer. She is also the United Nations special rapporteur on adequate housing, charged with probing deplorable living conditions and assessing compliance with international human rights law. Her latest project is a report on “informal settlements” – shanties, favelas, tent cities – which will be presented at the UN general assembly.

In Mexico City, she spent time in a slum by a railway line. In Manila and Jakarta, she visited decrepit and makeshift houses. San Francisco has a median home value of $1.3m and would seem an incongruous next stop. Farha had come on an unofficial visit, at the invitation of academics and advocates.

“The situation is unacceptable in light of the wealth of the country,” she said, adding that she was “deeply, deeply concerned” by the homelessness she saw.

Poverty in the US is an established UN focus; last month, another rapporteur was dismayed by visits to Skid Row in Los Angeles and hookworm-afflicted deep south communities.

In 2011, a UN representative visited Sacramento. After discovering that homeless people were defecating into plastic bags, the official wrote to the city’s mayor. Such circumstances, she said, could amount to “cruel, inhuman or degrading treatment”.

Farha squatted by the man with the cooking fire. His name was Eric Hoch, and he was 30.

The Minnesotan told her he had been homeless in San Francisco for two or three years. He complained of an old gunshot wound and said he did not understand the welfare system. He does not have a tent – he sleeps bundled in a blanket on the street.

“I’m going to ask kind of personal questions,” Farha said. “What do you do if you have to go the bathroom?”

Hoch described how he timed his bowel movements to the opening hours of restrooms in surrounding businesses.

“Did you know you have a right to housing?” she asked, referring to article 25 of the Universal Declaration of Human Rights. How would he react if the government offered him somewhere to live with no strings attached?

“That’d probably be something I’d hop, skip and jump to,” Hoch said.

“That’s something your government is supposed to do,” Farha said. “I hate to tell you, you’re being ripped off.”

Homelessness is on the rise in the US for the first time since the great recession. In San Francisco, about 7,500 homeless people were counted last year, more than two-thirds suffering from health conditions including brain injuries and HIV/Aids.

It would be easy to dismiss such extreme poverty as a product of human frailty. Ben Carson, secretary of housing and urban development, has described poverty as a “state of mind”. Farha takes a contrary view.

“If I turned to San Francisco and there were 100 people who were homeless, I might say, ‘Hmm, this is probably about psychological disability, drug dependence, a history of sexual abuse in their childhood’ or something like that. I might be able to say that it is very individualized.

“But when you’re seeing the numbers of people who are homeless here and in every other city, you just know it’s structural.”

There is almost nowhere in the US that is affordable for those earning minimum wage. The country is short about 7.5m homes for extremely low-income renters. In San Francisco, the waitlist to get into a homeless shelter is more than 1,000 names long.

“In international human rights law,” Farha said, “providing shelter to people who are homeless is the absolute minimum standard for any country, regardless of resources.”

The next day, in Oakland, she saw one kind of stopgap. In the shadow of several freeways, the city had installed a scattering of sheds, housing about 35 people on a bare patch of gravel. The sheds do not come with electricity, plumbing or insulation. Each has one small window.

Such “tiny homes” are increasingly used in western cities when permanent housing is unavailable. Experts fear they could pave the way for American shantytowns.

Farha was led inside a shed inhabited by Robyin Clark, who described herself as the camp “mom”. She has been homeless, she said, off and on since the age of 12. The city had supplied a camp bed and three storage boxes. At night it was “like an iced freezer”, Clark said. Her daughter, Kimmie Sanchez, said she was grateful for the respite.

The alternative was evident a mile or two away, in a string of shacks built from discarded materials. Farha picked her way through one, an immense, rickety warren of tarps and wood, the floor sodden and covered with broken glass. The inhabitant, Mavin Carter-Griffin, told Farha she sometimes felt she had created a Burning Man-style art project. Other times, it felt like a trap.

“There’s this abject humiliation and embarrassment,” she said. “I’m astounded that my life is here.”

Outside, there was a portable toilet serving dozens of people. It was overflowing, said a member of Farha’s team who used it.

Farha was struck by the stories she heard of homeless people losing their few possessions in encampment sweeps, and laws that criminalize sitting on sidewalks or food sharing. “There’s a cruelty here that I don’t think I’ve seen,” she said.

Next she was heading to Los Angeles, where thousands live in conditions that do not meet standards set for refugee camps.

“I’m slightly terrified to go to LA,” Farha said, “because everyone says LA is even worse.”