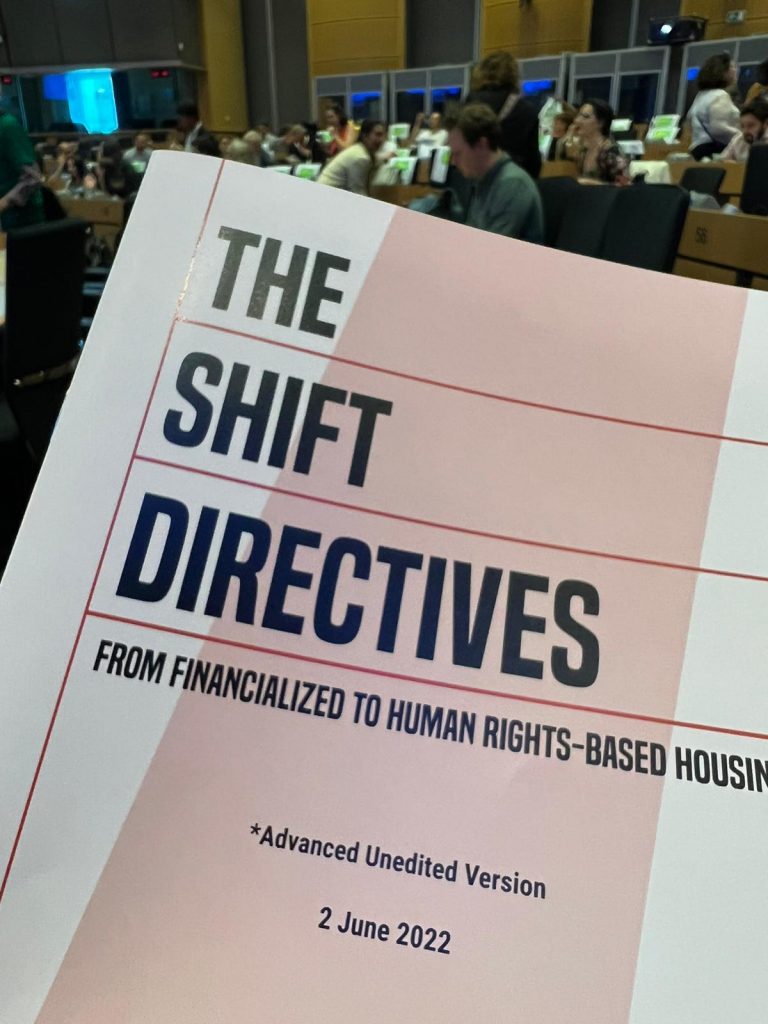 BRUSSELS, June 2, 2022- Leilani Farha, Global Director of The Shift and former UN Rapporteur on the right to housing, launched on Thursday the first-ever directives on the financialization of housing in the European Parliament.

“The financialization of housing is one of the leading causes of unaffordability and a major driver of inequality in cities around the world. It’s time for states to stop behaving like their housing systems are working for everyone and that the financial actors who have fuelled the housing crisis should be left to solve it,” said Farha. “The Shift Directives are an urgently needed human rights framework offering a clear path forward to reorient housing systems and the actions of investors.”

The launch of The Shift Directives represents a watershed moment for the right to housing movement. It is the result of nearly two years of work, including consultations with dozens of experts around the globe.

The directives expose how financialization is contributing to the global housing crisis and are a wake-up call that the status quo is neither sustainable nor acceptable. The directives present practical, human rights-based solutions for governments and investors. They are also a tool for housing and human rights advocates to push back and assert the right to housing.

“Human rights advocacy will always have limited reach and inadequate results until it can deal effectively with the impact of financial structures and institutions. These Shift Directives represent a huge and pioneering step in that direction,” said Philip Alston, Director and Chair of NYU’s Center for Human Rights and Global Justice.

“The Shift Directives make a compelling case as to why we need to transition from short-term, extractive, and financialised economic systems to those that put public value at their heart,” said Mazzucato. “This call to reorient housing should serve as a guiding mission for policymakers concerned with creating real public value.”

The launch of The Shift Directives also coincided with in an opinion piece in The Guardian and a special episode of PUSHBACK Talks.

“This launch, coupled with a wave of global grassroots action and regulatory measures, shows that a paradigm shift is underway. We must seize this moment and momentum to fix our housing systems to ensure everyone has adequate, affordable housing that preserves human dignity,” added Farha.